One shot learning for generic instance segmentation in RGBD videos 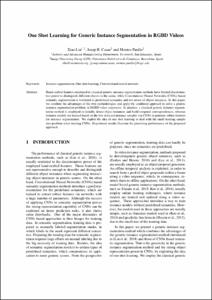