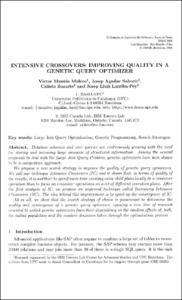 Document typeConference report
PublisherInternational Centre for Numerical Methods in Engineering (CIMNE)
Rights accessOpen Access
Abstract
Database schemas and user queries are continuously growing with the need for storing and accessing large amounts of structured information. Among the several proposals to deal with Large Join Query Problem, genetic optimizers have shown to be a competitive approach. We propose a new search strategy to improve the quality of genetic query optimizers. We call our technique Intensive Crossovers (IC) and it shows that, in terms of quality of the results, it is worthier to spend more time creating extra child plans locally in a crossover operation than to focus on crossover operations on a lot of different execution plans. After the first analysis of IC, we propose an improved technique called Increasing Intensive Crossovers (IIC). The idea behind this improvement is to speed-up the convergence of IC. All in all, we show that the search strategy of choice is paramount to determine the qualily and convergence of a genetic query optimizer, opening a new line of research oriented to unlink genetic optimizers from their dependency on the random effects of both the initial population and the random decisions taken through the optimization process.
CitationMuntés, V. [et al.]. Intensive crossovers: Improving quality in a genetic query optimizer. A: Jornadas de Ingeniería del Software y Bases de Datos. "Ingeniería del software y bases de datos: Actas de las XI Jornadas de Ingeniería del Software y Bases de Datos: Sitges, 3 l 6 de octubre de 2006". Barcelona: International Centre for Numerical Methods in Engineering (CIMNE), 2006, p. 131-140.
URIhttp://hdl.handle.net/2117/165530
ISBN84-95999-99-4
Collections
Share: