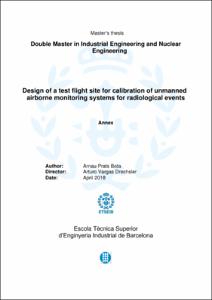 Except where otherwise noted, content on this work is licensed under a Creative Commons license : Attribution-NonCommercial-NoDerivs 3.0 Spain
Abstract
This project was developed as part of the European 16ENV04 PREPAREDNESS project in the initial phase of Work package 1, Subsection A1.1.7 Metrology for mobile detection of ionizing radiation following a nuclear or radiological incident. During this project, a radioactive source to be used in calibrations and measurements of the mobile detection of ionizing radiation system was designed.The main objectives fulfilled throughout this project are the source, shielding and transport package design in accordance with the actual radioactive materials transport and usage regulations, the drafting of a safety report to obtain the source’s purchase authorization, the establishment of a methodology to characterise aerial flight sites using a NaI 3x12 and a NaI 3x3 detector, and the creation of a tool capable of estimate the response of different detectors simulating that they are mounted in Unmanned Aerial Vehicles (UAV).The source was designed so that a low efficiency detector, such as a CZT 1500 detector, and a higher efficiency detector, such as a NaI 3x3 detector, were able to detect the source at 5 m and 50 m height respectively so that a large amount of different measurement flight can be performed. The selected source is Cs-137 of 370 MBq.The shieldingand the transport package were designed so that the whole package could be considered an excepted package. This means that the regulations are less restrictive, even sothe limits established for this type of package, which are set at an effective dose of5 μSv/h at the closest to the source external surface, are fulfilled. To design them and compute the doses the software MicroShield®was used.In the safety report one will find a safety study of the received doses due to the usage of the source over a year and the compliance with the established limits of 20 mSv/y for a professional exposed worker. In addition, the procedures to be followed, possible abnormality scenarios and their emergency plan will be described.The methodology established to characterize the aerial flight sites includes from the spectra taken “in situ” to the determination of the fluence rate at any height due to the contribution of the K-40, photopeak of 1461 keV, and Bi-214, photopeak of 609 keV.Finally, the tool was created analytically using an excel file. It allows the user to introduce several parameters to simulate different flight. The height of the flight, the detector’s efficiency, the time of each spectra or the velocity of the UAV are some of these parameters.In the mediumterm, the purchase of the radioactive source, first flights with the source and a mobile detection system prototype and the improving and assessing with the created tool are the lines of future work
SubjectsIonizing radiation, Radioactive substances--Transportation, Radiació ionitzant, Substàncies radioactives -- Transport, Transport de materials radioactius
URIhttp://hdl.handle.net/2117/165521
Collections
Share: