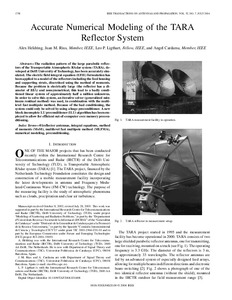 The radiation pattern of the large parabolic reflectors of the Transportable Atmospheric RAdar system (TARA), developed at Delft University of Technology, has been accurately simulated. The electric field integral equation (EFIE) formulation has been applied to a model of the reflectors including the feed housing and supporting struts, discretised using the method of moments. Because the problem is electrically large (the reflector has a diameter of 33λ) and nonsymmetrical, this lead to a badly conditioned linear system of approximately half a million unknowns. In order to solve this system, an iterative solver (generalized minimum residual method) was used, in combination with the multilevel fast multipole method. Because of the bad conditioning, the system could only be solved by using a huge preconditioner. A new block-incomplete LU preconditioner (ILU) algorithm has been employed to allow for efficient out-of-computer core memory preconditioning.
CitationHeldring, A.; Rius, J. M.; Ligthart, L. P.; Cardama, A. Accurate numerical modeling of the TARA reflector system. IEEE Transactions on Antennas and Propagation, 2004, vol. 52, núm. 7, p. 1758-1766.
URIhttp://hdl.handle.net/2117/1655
ISSN0018-926X