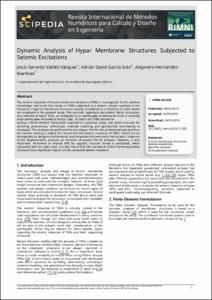 Show full item record
Valdés-Vázquez, Jesús Gerardo
García-Soto, Adrián David
Hernández-Martínez, Alejandro
Document typeArticle
PublisherUniversitat Politècnica de Catalunya. CIMNE
Rights accessOpen Access
Abstract
The seismic response of tensile membrane structures (TMS) is investigated. To the authors knowledge, this is the first study on TMSs subjected to a seismic record reported in the literature. A type of membrane structures usually considered as a reference in other works are employed in the present study. The selected hyperbolic-paraboloid fabric structures, also referred as hypar TMSs, are subjected to an earthquake accelerogram from a relatively large earthquake recorded at Norcia, Italy. To obtain the TMSs seismic response, a finite element formulation reported in a previous study, and which accounts for wrinkling phenomena, orthotropic material modeling, and geometrical nonlinearity, is employed. The analyses are performed in two stages; first for the prestressed case and then the seismic loading is added. It is found that the seismic response of TMSs should not be disregarded by designers beforehand, since important increments in the dynamic response of the displacements produce an incremet of around 9% for stresses. However, a very important increment of around 80% for support reaction forces is computed, when compared with the static case. It is also found that the orientation of the frame-supporting structure has a significant impact on the computed seismic reactions.
CitationValdés-Vázquez, J. G.; García-Soto, A. D.; Hernández-Martínez, A. Dynamic Analysis of Hypar Membrane Structures Subjected to Seismic Excitations. "Revista internacional de métodos numéricos para cálculo y diseño en ingeniería", 2019, vol. 35, núm. 1.
URIhttp://hdl.handle.net/2117/165364
DOI10.23967/j.rimni.2018.11.005
ISSN0213-1315
1886-158X
Collections
Share: