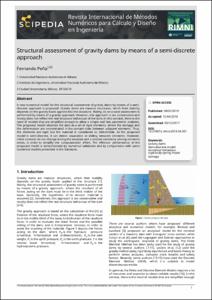 Show full item record
Peña, Fernando
Document typeArticle
PublisherUniversitat Politècnica de Catalunya. CIMNE
Rights accessOpen Access
Abstract
A new numerical model for the structural assessment of gravity dams by means of a semidiscrete approach is proposed. Gravity dams are massive structures, which their stability depends on the gravity loads applied into the structure. Mainly, its structural assessment is performed by means of a gravity approach. However, this approach is too conservative and mostly does not reflect the real structural behaviour of the dam. In this context, there is the need of models that are simplified enough to allow a simple and fast parametric analyses. The proposed model idealizes the dam as a set of rigid elements, where the damage and the deformation are concentrated in the contact sides between adjacent elements. Thus, the elements are rigid, but the material is considered as deformable. As the proposed model is semi-discrete, it can detect separation or sliding between elements. However, initial contacts do not change during the analyisis and a relative continuity among elements exists, in order to simplify the computational effort. The effective performance of the proposed model is demonstrated by numerical validation and by comparisons with some numerical models presented in the literature.
CitationPeña, F. Structural assessment of gravity dams by means of a semi-discrete approach. "Revista internacional de métodos numéricos para cálculo y diseño en ingeniería", 2019, vol. 35, núm. 1.
URIhttp://hdl.handle.net/2117/165276
DOI10.23967/j.rimni.2018.04.001
ISSN0213-1315
1886-158X
Collections
Share: