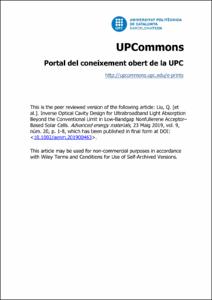 Document typeArticle
Rights accessOpen Access
Abstract
In the subwavelength regime, several nanophotonic configurations have been proposed to overcome the conventional light trapping or light absorption enhancement limit in solar cells also known as the Yablonovitch limit. It has been recently suggested that establishing such limit should rely on computational inverse electromagnetic design instead of the traditional approach combining intuition and a priori known physical effect. In the present work, by applying an inverse full wave vector electromagnetic computational approach, a 1D nanostructured optical cavity with a new resonance configuration is designed that provides an ultrabroadband (˜450 nm) light absorption enhancement when applied to a 107 nm thick active layer organic solar cell based on a low-bandgap (1.32 eV) nonfullerene acceptor. It is demonstrated computationally and experimentally that the absorption enhancement provided by such a cavity surpasses the conventional limit resulting from an ergodic optical geometry by a 7% average over a 450 nm band and by more than 20% in the NIR. In such a cavity configuration the solar cells exhibit a maximum power conversion efficiency above 14%, corresponding to the highest ever measured for devices based on the specific nonfullerene acceptor used.
CitationLiu, Q. [et al.]. Inverse Optical Cavity Design for Ultrabroadband Light Absorption Beyond the Conventional Limit in Low-Bandgap Nonfullerene Acceptor–Based Solar Cells. "Advanced energy materials", 23 Maig 2019, vol. 9, núm. 20, p. 1-8.
URIhttp://hdl.handle.net/2117/165271
DOI10.1002/aenm.201900463
ISSN1614-6832
Publisher versionhttps://onlinelibrary.wiley.com/doi/abs/10.1002/aenm.201900463
Collections
Share: