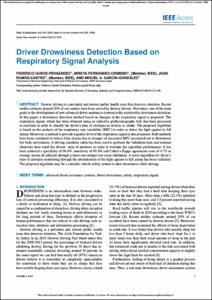 Document typeArticle
PublisherInstitute of Electrical and Electronics Engineers (IEEE)
Rights accessOpen Access
Abstract
Drowsy driving is a prevalent and serious public health issue that deserves attention. Recent studies estimate around 20% of car crashes have been caused by drowsy drivers. Nowadays, one of the main goals in the development of new advanced driver assistance systems is the trustworthy drowsiness detection. In this paper, a drowsiness detection method based on changes in the respiratory signal is proposed. The respiratory signal, which has been obtained using an inductive plethysmography belt, has been processed in real-time in order to classify the driver’s state of alertness as drowsy or awake. The proposed algorithm is based on the analysis of the respiratory rate variability (RRV) in order to detect the fight against to fall asleep. Moreover, a method to provide a quality level of the respiratory signal is also proposed. Both methods have been combined to reduce false alarms due to changes of measured RRV associated not to drowsiness but body movements. A driving simulator cabin has been used to perform the validation tests and external observers have rated the drivers’ state of alertness in order to evaluate the algorithm performance. It has been achieved a specificity of 96.6%, sensitivity of 90.3% and Cohen’s Kappa agreement score of 0.75 on average across all subjects through a leave-one-subject-out cross-validation. A novel algorithm for driver’s state of alertness monitoring through the identification of the fight against to fall asleep has been validated. The proposed algorithm may be a valuable vehicle safety system to alert drowsiness while driving
CitationGuede, F. [et al.]. Driver drowsiness detection based on respiratory signal analysis. "IEEE access", 24 Juny 2019, vol. 7, p. 81826-81838.
URIhttp://hdl.handle.net/2117/165267
DOI10.1109/ACCESS.2019.2924481
ISSN2169-3536
Publisher versionhttps://ieeexplore.ieee.org/document/8744224
Collections
Share: