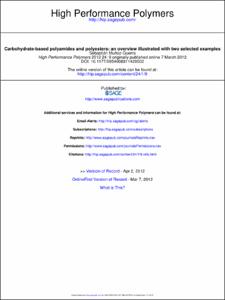 Document typeArticle
Rights accessOpen Access
Abstract
An overview on the synthesis, structure and properties of polyamides and aromatic copolyesters produced by using monomers derived from carbohydrates is provided. Two examples are selected for illustration: (a) aliphatic polyamides prepared from aldaric acids and (b) aromatic copolyesters containing alditols units. Polycondensation in solution of n-alkanediamines (n taking even values from 6 to 12) with activated pentaric (L-arabino and xylo) and hexaric (galacto and D-manno) acids bearing the secondary hydroxyl groups protected as methyl ether, afforded linear polyaldaramides PA-nSu with Mw oscillating between 25 000 and 150 000 g mol 1. They are stable above 300 C and are semicrystalline even so only PA-nMn are stereoregular. Melting temperatures of PA-nSu range between 140 and 230 C and most of them are able to crystallize from the melt at a rate that increases with the length of the polymethylene segment. Both melting and glass transition temperatures decrease with the content in sugar units. Spherulitic films, oriented fibers and lamellar single crystals could be obtained from PA-nSu. All these polyamides seem to adopt a common crystal structure made of hydrogen-bonded sheets with the sugar residue skewed to attain an efficient side-by-side packing of the polymer chains. Aromatic homopolyesters and copolyesters derived from terephthalic acid and mixtures of butylene glycol and O-methylated alditols were prepared by polycondensation in the melt with Mw in the 20 000–50 000 g mol 1 range and a random microstructure. The thermal properties of PBT containing alditols units are very depending on the sugar constitution and copolyester composition. In general they are thermally stable above 300 C and display crystallinity for contents in alditols up to 30%. Melting temperatures decrease with the content in alditols whereas an opposite trend is observed for glass transition temperatures. The crystalline structure of PBT is preserved in the crystalline copolyesters whereas a different crystal lattice is adopted by homopolyesters entirely made of alditol units. In general, polyamides and polyesters containing sugar derived units are widely soluble in organic solvents, markedly hydrophilic and more susceptible to hydrolysis than their parent polymers.
CitationMuñoz, S. Carbohydrate-based polyamides and polyesters: an overview illustrated with two selected examples. "High performance polymers", Febrer 2012, vol. 24, núm. 1, p. 9-23.
URIhttp://hdl.handle.net/2117/16502
DOI10.1177/0954008311429502
ISSN0954-0083
Publisher versionhttp://hip.sagepub.com/content/24/1/9.full.pdf+html
Collections
Share: