On the invariant causal characterization of singularities in spherically symmetric spacetimes 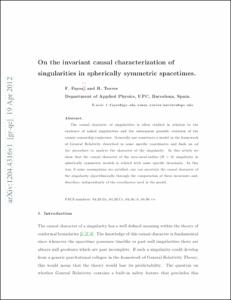 Document typeArticle
Rights accessOpen Access
Abstract
The causal character of singularities is often studied in relation to the existence of naked singularities and the subsequent possible violation of the cosmic censorship conjecture. Generally, one constructs a model in the framework of general relativity described in some specific coordinates and finds an ad hoc procedure to analyze the character of the singularity. In this paper, we show that the causal character of the zero-areal-radius (R = 0) singularity in spherically symmetric models is related to some specific invariants. In this way, if some assumptions are satisfied, one can ascertain the causal character of the singularity algorithmically through the computation of these invariants and, therefore, independent of the coordinates used in the model.
CitationFayos, F.; Torres, R. On the invariant causal characterization of singularities in spherically symmetric spacetimes. "Classical and quantum gravity", 18 Abril 2012, vol. 29, núm. 9.
URIhttp://hdl.handle.net/2117/16494
DOI10.1088/0264-9381/29/9/095019
ISSN0264-9381
Publisher versionhttp://iopscience.iop.org/0264-9381/29/9/095019
Collections
Share: