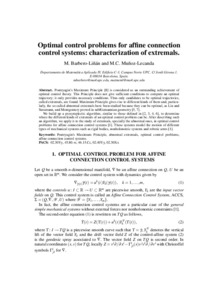 Document typeConference report
PublisherAmerican Institute of Physics
Rights accessOpen Access
Abstract
Pontryagin’s Maximum Principle [8] is considered as an outstanding achievement of optimal control theory. This Principle does not give sufficient conditions to compute an optimal trajectory; it only provides necessary conditions. Thus only candidates to be optimal trajectories, called extremals, are found. Maximum Principle gives rise to different kinds of them and, particularly, the so-called abnormal extremals have been studied because they can be optimal, as Liu and Sussmann, and Montgomery proved in subRiemannian geometry [5, 7]. We build up a presymplectic algorithm, similar to those defined in [2, 3, 4, 6], to determine where the different kinds of extremals of an optimal control problem can be. After describing such an algorithm, we apply it to the study of extremals, specially the abnormal ones, in optimal control problems for affine connection control systems [1]. These systems model the motion of different types of mechanical systems such as rigid bodies, nonholonomic systems and robotic arms [1].
CitationMuñoz Lecanda, Miguel Carlos. “ Optimal control problems for affine connection control systems: characterization of extremals”. A: AIP Conference Proceedings. Geometry and physics: XVI International Fall Workshop. 2008, vol. 1023, p. 127-131. ISBN 978-0-7354-0546-2
URIhttp://hdl.handle.net/2117/1646
ISBN0-7354-0546-2
Collections
Share: