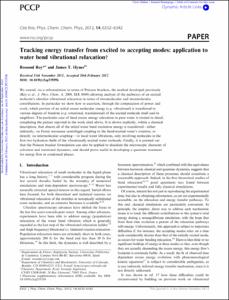 Except where otherwise noted, content on this work is licensed under a Creative Commons license : Attribution-NonCommercial-NoDerivs 3.0 Spain
Abstract
We extend, via a reformulation in terms of Poisson brackets, the method developed previously (Rey et al., J. Phys. Chem. A, 2009, 113, 8949) allowing analysis of the pathways of an excited molecule's ultrafast vibrational relaxation in terms of intramolecular and intermolecular contributions. In particular we show how to ascertain, through the computation of power and work, which portion of an initial excess molecular energy (e.g. vibrational) is transferred to various degrees of freedom (e.g. rotational, translational) of the excited molecule itself and its neighbors. The particular case of bend excess energy relaxation in pure water is treated in detail, completing the picture reported in the work cited above. It is shown explicitly, within a classical description, that almost all of the initial water bend excitation energy is transferred—either indirectly, via Fermi resonance centrifugal coupling to the bend-excited water's rotation, or directly via intermolecular coupling— to local water librations, only involving molecules in the first two hydration shells of the vibrationally excited water molecule. Finally, it is pointed out that the Poisson bracket formulation can also be applied to elucidate the microscopic character of solvation and rotational dynamics, and should prove useful in developing a quantum treatment for energy flow in condensed phases.
CitationRey, R.; Hynes, J. Tracking energy transfer from excited to accepting modes : application to water bend vibrational relaxation. "Physical chemistry chemical physics", 2012, vol. 14, núm. 18, p. 6332-6342.
URIhttp://hdl.handle.net/2117/16428
DOI10.1039/c2cp23555b
ISSN1463-9076
Publisher versionhttp://pubs.rsc.org/en/content/articlelanding/2012/cp/c2cp23555b
Collections
Share: