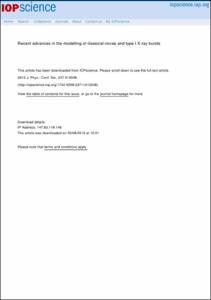 Classical nova outbursts and type I X-ray bursts are thermonuclear stellar explosions driven by charged-particle reactions. Extensive numerical simulations of nova explosions have shown that the accreted envelopes attain peak temperatures between 0.1 and 0.4 GK, for about several hundred seconds, and therefore, their ejecta is expected to show signatures of significant nuclear activity. Indeed, it has been claimed that novae play some role in the enrichment of the interstellar medium through a number of intermediate-mass elements. This includes 17O, 15N, and 13C, systematically overproduced in huge amounts with respect to solar abundances, with a lower contribution to a number of species with A<40, such as 7Li, 19F, or 26Al. In this review, we present new 1-D hydrodynamic models of classical nova outbursts, from the onset of accretion up to the explosion and ejection phases. Special emphasis is put on their gross observational properties (including constraints from meteoritic presolar grains and potential gamma-ray signatures) and on their associated nucleosynthesis. Multidimensional models of mixing at the core-envelope interface during outbursts will also be presented. The impact of nuclear uncertainties on the final yields will be also outlined. Detailed analysis of the relevant reactions along the main nuclear path for type I X-ray bursts has only been scarcely addressed, mainly in the context of parameterized one-zone models. Here, we present a detailed study of the nucleosynthesis and nuclear processes powering type I X-ray bursts. The reported bursts have been computed by means of a spherically symmetric (1D), Lagrangian, hydrodynamic code, linked to a nuclear reaction network that contains 325 isotopes (from 1H to 107Te), and 1392 nuclear processes. These evolutionary sequences, followed from the onset of accretion up to the explosion and expansion stages, have been performed for two different metallicities to explore the dependence between the extension of the main nuclear flow and the initial metal content. We carefully analyze the physical parameters that determine the light curve (including recurrence times, ratios between persistent and burst luminosities, or the extent of the envelope expansion). Results are in qualitative agreement with the observed properties of some well-studied bursting sources.
CitationJosé, J. [et al.]. Recent advances in the modelling of classical novae and type I X-ray bursts. "Journal of Physics: Conference Series", 2012, vol. 337, p. 1-7.
URIhttp://hdl.handle.net/2117/16412
DOI10.1088/1742-6596/337/1/012038
ISSN1742-6588
Publisher versionhttp://iopscience.iop.org/1742-6596/337/1/012038/pdf/1742-6596_337_1_012038.pdf