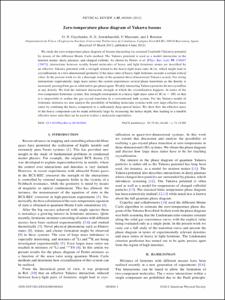 We study the zero-temperature phase diagram of bosons interacting via screened Coulomb (Yukawa) potential by means of the diffusion Monte Carlo method. The Yukawa potential is used as a model interaction in the neutron matter, dusty plasmas, and charged colloids. As shown by Petrov et al. [Phys. Rev. Lett. 99, 130407 (2007)], interactions between weakly bound molecules of heavy and light fermionic atoms are described by an effective Yukawa potential with a strength related to the heavy-light mass ratio M/m, which might lead to crystallization in a two-dimensional geometry if the mass ratio of heavy-light fermions exceeds a certain critical value. In the present work we do a thorough study of the quantum three-dimensional Yukawa system. For strong interactions (equivalently, large mass ratios) the system experiences several phase transitions as the density is increased, passing from gas to solid and to gas phase again.Weakly interacting Yukawa particles do not crystallize at any density. We find the minimal interaction strength at which the crystallization happens. In terms of the two-component fermionic system, this strength corresponds to a heavy-light mass ratio of M/m ∼ 180, so that it is impossible to realize the gas-crystal transition in a conventional bulk system. For the Yukawa model of fermionic mixtures we also analyze the possibility of building molecular systems with very large effective mass ratios by confining the heavy component to a sufficiently deep optical lattice. We show how the effective mass of the heavy component can be made arbitrarily large by increasing the lattice depth, thus leading to a tunable effective mass ratio that can be used to realize a molecular superlattice.
CitationOsychenko, O. [et al.]. Zero-temperature phase diagram of Yukawa bosons. "Physical review A", 2012, vol. 85, núm. 6, p. 1-6.
URIhttp://hdl.handle.net/2117/16407
DOI10.1103/PhysRevA.85.063604
ISSN1050-2947
Publisher versionhttp://pra.aps.org/abstract/PRA/v85/i6/e063604