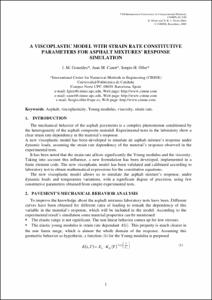 The mechanical behavior of the asphalt pavements is a complex phenomenon conditioned by the heterogeneity of the asphalt composite material. Experimental tests in the laboratory show a clear strain rate dependency in the material’s response. A new viscoplastic model has been developed to simulate de asphalt mixture’s response under dynamic loads, assuming the strain rate dependency of the material’s response observed in the experimental tests. It has been noted that the strain rate affects significantly the Young modulus and the viscosity. Taking into account this influence, a new formulation has been developed, implemented in a finite element code. The new viscoplastic model has been validated and calibrated according to laboratory test to obtain mathematical expressions for the constitutive equations. The new viscoplastic model allows us to simulate the asphalt mixture’s response, under dynamic loads and temperature variations, with a significant degree of precision, using few constitutive parameters obtained from simple experimental tests.
CitationGonzález, J.M.; Miquel, J.; Oller, S. A viscoplastic model with strain rate constitutive parameters for asphalt mixtures' response simulation. A: International Conference on Computational Plasticity Fundamentals and Applications. "Computational Plasticity: Fundamentals and Applications - Proceedings of the 8th International Conference on Computational Plasticity, COMPLAS VIII". 2005, p. 727-730.
URIhttp://hdl.handle.net/2117/16376
ISBN978-849599979-5
Publisher versionhttp://cataleg.upc.edu/record=b1271021~S1*cat