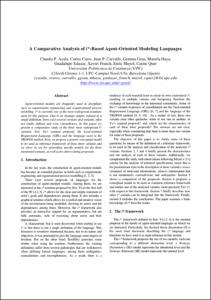 Except where otherwise noted, content on this work is licensed under a Creative Commons license : Attribution-NonCommercial-NoDerivs 3.0 Spain
Abstract
Agent-oriented models are frequently used in disciplines such as requirements engineering and organizational process modelling. i* is currently one of the most widespread notations used for this purpose. Due to its strategic nature, instead of a single definition, there exist several versions and variants, often not totally defined and even contradictory. In this paper we present a comparative study of the three most widespread i* variants: Eric Yu’s seminal proposal, the Goal-oriented Requirement Language (GRL) and the language used in the TROPOS method. Next, we propose a generic conceptual model to be used as reference framework of these three variants and we show its use for generating specific models for the three mentioned variants, as well as for other existing proposals.
CitationAyala, C. [et al.]. A comparative analisys of i*-based agent-oriented modeling languages. A: International Workshop on Agent-Oriented Software Development Methodology. "SEKE 2005, the 17th International Conference on Software Engineering & Knowledge Engineering: technical program: July 14-16, 2005, Taipei, Taiwan, Republic of China: proceedings". 2005, p. 43-50.
URIhttp://hdl.handle.net/2117/16234
ISBN1-891706-16-0
Collections
Share: