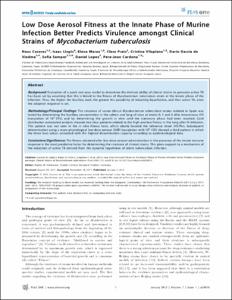 Document typeArticle
Rights accessOpen Access
All rights reserved. This work is protected by the corresponding intellectual and industrial property rights. Without prejudice to any existing legal exemptions, reproduction, distribution, public communication or transformation of this work are prohibited without permission of the copyright holder
ProjectSTOPLATENT-TB - LATENT TUBERCULOSIS: New tools for the detection and clearance of dormant Mycobacterium tuberculosis. (EC-FP7-200999)
Abstract
Background: Evaluation of a quick and easy model to determine the intrinsic ability of clinical strains to generate active TB has been set by assuming that this is linked to the fitness of Mycobacterium tuberculosis strain at the innate phase of the infection. Thus, the higher the bacillary load, the greater the possibility of inducting liquefaction, and thus active TB, once the adaptive response is set. Methodology/Principal Findings: The virulence of seven clinical Mycobacterium tuberculosis strains isolated in Spain was tested by determining the bacillary concentration in the spleen and lung of mice at weeks 0, 1 and 2 after intravenous (IV) inoculation of 104 CFU, and by determining the growth in vitro until the stationary phase had been reached. Cord distribution automated analysis showed two clear patterns related to the high and low fitness in the lung after IV infection. This pattern was not seen in the in vitro fitness tests, which clearly favored the reference strain (H37Rv). Subsequent determination using a more physiological low-dose aerosol (AER) inoculation with 102 CFU showed a third pattern in which the three best values coincided with the highest dissemination capacity according to epidemiological data. Conclusions/Significance: The fitness obtained after low dose aerosol administration in the presence of the innate immune response is the most predictive factor for determining the virulence of clinical strains. This gives support to a mechanism of the induction of active TB derived from the dynamic hypothesis of latent tuberculosis infection.
CitationCáceres, N. [et al.]. Low dose aerosol fitness at the innate phase of murine infection better predicts virulence amongst clinical strains of mycobacterium tuberculosis. "PLoS One", 03 Gener 2012, vol. 7, núm. 1.
URIhttp://hdl.handle.net/2117/16232
DOI10.1371/journal.pone.0029010
ISSN1932-6203
Collections
Share: