Research Letter: is neuroticism a risk factor for postpartum depression? 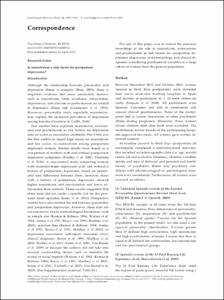