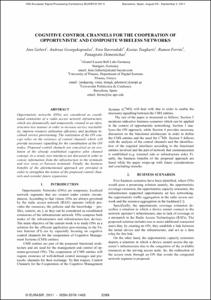 Demestichas, Panagiotis
Document typeConference report
Rights accessOpen Access
Abstract
Opportunistic networks (ONs) are considered as coordinated extensions of a radio access network infrastructure, which are dynamically and temporarily created in an infrastructure-less manner in order to increase service reachability, improve resource utilization efficiency and facilitate localised service provisioning. The realization of the ON concept relies on the existence of control channels which will provide necessary signalling for the coordination of the ON nodes. Proposed control channels are conceived as an evolution of the already established cognitive pilot channel concept. As a result, new interfaces are discussed in order to convey information from the infrastructure to the terminals and vice versa or between terminals. Finally, the business benefits of the aforementioned approach are provided in order to strengthen the notion of the proposed control channels and consider future expansions.
CitationGebert, J. [et al.]. Cognitive control channels for the cooperation of opportunistic and composite wireless networks. A: European Signal Processing Conference. "EUSIPCO 2011: 19th European Signal Processing Conference". Barcelona: 2011, p. 2289-2293.
URIhttp://hdl.handle.net/2117/16092
ISBN2076-1465
Publisher versionhttp://www.eurasip.org/Proceedings/Eusipco/Eusipco2011/papers/1569425075.pdf
Collections
Share: