Frames: a maximum entropy statistical estimate of the inverse problem 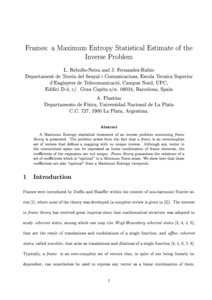 Plastino, Angel Luís
Document typeArticle
Rights accessOpen Access
Abstract
A maximum entropy statistical treatment of an inverse problem concerning frame theory is presented. The problem arises from the fact that a frame is an overcomplete set of vectors that defines a mapping with no unique inverse. Although any vector in the concomitant space can be expressed as a linear combination of frame elements, the coefficients of the expansion are not unique. Frame theory guarantees the existence of a set of coefficients which is “optimal” in a minimum norm sense. We show here that these coefficients are also “optimal” from a maximum entropy viewpoint.
URIhttp://hdl.handle.net/2117/1608
Collections
Share: