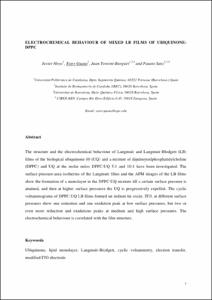 Sanz Carrasco, Fausto
Document typeArticle
Rights accessOpen Access
Abstract
The structure and the electrochemical behaviour of Langmuir and Langmuir–Blodgett (LB) films of the biological ubiquinone-10 (UQ) and a mixture of dipalmytoilphosphatidylcholine (DPPC) and UQ at the molar ratios DPPC:UQ 5:1 and 10:1 have been investigated. The surface pressure-area isotherms of the Langmuir films and the AFM images of the LB films show the formation of a monolayer in the DPPC:UQ mixture till a certain surface pressure is attained, and then at higher surface pressures the UQ is progressively expelled. The cyclic voltammograms of DPPC:UQ LB films formed on indium tin oxide, ITO, at different surface pressures show one reduction and one oxidation peak at low surface pressures, but two or even more reduction and oxidations peaks at medium and high surface pressures. The electrochemical behaviour is correlated with the film structure.
CitationHoyo, J. [et al.]. Electrochemical behaviour of mixed LB films of ubiquinone-DPPC. "Journal of electroanalytical chemistry", Març 2012, vol. 669, núm. March, p. 6-13.
URIhttp://hdl.handle.net/2117/16007
DOI10.1016/j.jelechem.2012.01.020
ISSN0022-0728
Collections
Share: