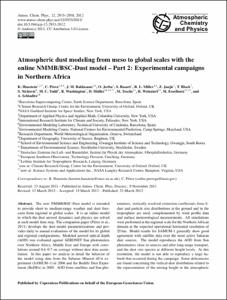 The new online NMMB/BSC-Dust model is intended to provide short to medium-range weather and dust forecasts from regional to global scales. The companion paper Pérez et al., 2011 develops the dust model parameterizations and provides daily to annual evaluations of the model for its global and regional configurations. Modeled aerosol optical depth (AOD) was evaluated against AERONET Sun photometers over Northern Africa, Middle East and Europe with correlations around 0.6–0.7 on average without dust data assimilation. In this paper we analyze in detail the behavior of the model using data from the Saharan Mineral dUst experiment (SAMUM-1) in 2006 and the Bodélé Dust Experiment (BoDEx) in 2005. AOD from satellites and Sun photometers, vertically resolved extinction coefficients from lidars and particle size distributions at the ground and in the troposphere are used, complemented by wind profile data and surface meteorological measurements. All simulations were performed at the regional scale for the Northern African domain at the expected operational resolution of 25 km. Model results for SAMUM-1 generally show good agreement with satellite data over the most active Saharan dust sources. The model reproduces the AOD from Sun photometers close to sources and after long-range transport, and the dust size spectra at different height levels. At this resolution, the model is not able to reproduce a large haboob occurred during the campaign. Some deficiencies are found concerning the vertical distribution. The mixing height is underestimated which may be attributed to poor soil initial conditions. For the BoDEx period, particular attention is paid to understand the dust model behavior in relation with the low level jet (LLJ) in the Bodélé. The diurnal temperature cycle depends strongly on the soil moisture, which is underestimated in the NCEP analysis used for model initialization. The daily maximum surface wind speeds are underestimated up to 50% in some days even when using a more accurate soil moisture initialization. The dust plume over the Bodélé is well reproduced by the model and the reductions in the threshold friction velocity substantially reduce the negative AOD bias in the model due to wind speed underestimation. The LLJ is also well reproduced, which is remarkable given the rather poor model initialization with NCEP-FNL data.
CitationHaustein, K. [et al.]. Atmospheric dust modeling from meso to global scales with the online NMMB/BSC-Dust model - Part 2: Experimental campaigns in Northern Africa. "Atmospheric chemistry and physics", 23 Març 2012, vol. 12, núm. 6, p. 2933-2958.
URIhttp://hdl.handle.net/2117/15961
DOI10.5194/acp-12-2933-2012
ISSN1680-7316
Publisher versionhttp://www.atmos-chem-phys.net/12/2933/2012/acp-12-2933-2012.pdf