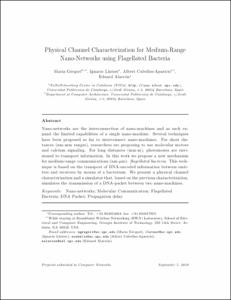 Document typeArticle
Rights accessOpen Access
Abstract
Nano-networks are the interconnection of nano-machines and as such expand the limited capabilities of a single nano-machine. Several techniques have been proposed so far to interconnect nano-machines. For short dis- tances (nm-mm ranges), researchers are proposing to use molecular motors and calcium signaling. For long distances (mm-m), pheromones are envisioned to transport information. In this work we propose a new mechanism for medium-range communications (nm- m): agellated bacteria. This technique is based on the transport of DNA-encoded information between emitters and receivers by means of a bacterium. We present a physical channel characterization and a simulator that, based on the previous characterization, simulates the transmission of a DNA-packet between two nano-machines.
CitationGregori, M. [et al.]. Physical channel characterization for medium-range nanonetworks using flagellated bacteria. "Computer networks", 21 Febrer 2011, vol. 55, núm. 3, p. 779-791.
URIhttp://hdl.handle.net/2117/15941
DOI10.1016/j.comnet.2010.10.019
ISSN1389-1286
Collections
Share: