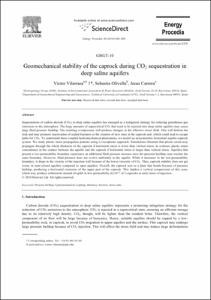 Document typeArticle
Rights accessOpen Access
European Commission's projectMUSTANG - A multiple space and time scale approach for the quantification of deep saline formations for CO2 storage (EC-FP7-227286)
Abstract
Sequestration of carbon dioxide (CO2) in deep saline aquifers has emerged as a mitigation strategy for reducing greenhouse gas emissions to the atmosphere. The large amounts of supercritical CO2 that need to be injected into deep saline aquifers may cause large fluid pressure buildup. The resulting overpressure will produce changes in the effective stress field. This will deform the rock and may promote reactivation of sealed fractures or the creation of new ones in the caprock seal, which could lead to escape paths for CO2. To understand these coupled hydromechanical phenomena, we model an axisymmetric horizontal aquifer-caprock system. We study plastic strain propagation patterns using a viscoplastic approach. Simulations illustrate that plastic strain may propagate through the whole thickness of the caprock if horizontal stress is lower than vertical stress. In contrast, plastic strain concentrates in the contact between the aquifer and the caprock if horizontal stress is larger than vertical stress. Aquifers that present a low-permeability boundary experience an additional fluid pressure increase once the pressure buildup cone reaches the outer boundary. However, fluid pressure does not evolve uniformly in the aquifer. While it increases in the low-permeability boundary, it drops in the vicinity of the injection well because of the lower viscosity of CO2. Thus, caprock stability does not get worse in semi-closed aquifers compared to open aquifers. Overall, the caprock acts as a plate that bends because of pressure buildup, producing a horizontal extension of the upper part of the caprock. This implies a vertical compression of this zone, which may produce settlements instead of uplift in low-permeability (k≤10-18 m2) caprocks at early times of injection.
CitationVilarrasa, V.; Olivella, S.; Carrera, J. Geomechanical stability of the caprock during CO2 sequestration in deep saline aquifers. "Energy procedia", 2011, núm. 4, p. 5306-5313.
URIhttp://hdl.handle.net/2117/15846
DOI10.1016/j.egypro.2011.02.511
ISSN1876-6102
Collections
Share: