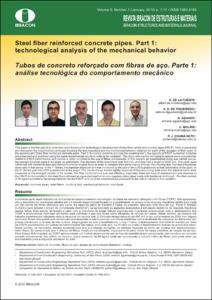 Chama Neto, Pedro Jorge
Document typeArticle
Rights accessOpen Access
Abstract
This paper is the first part of an extensive work focusing the technological development of steel fiber reinforced concrete pipes (FRCP). Here is presented and discussed the experimental campaign focusing the test procedure and the mechanical behavior obtained for each of the dosages of fiber used. In the second part (“Steel fiber reinforced concrete pipes. Part 2: Numerical model to simulate the crushing test”), the aspects of FRCP numerical modeling are presented and analyzed using the same experimental results in order to be validated. This study was carried out trying to reduce some uncertainties related to FRCP performance and provide a better condition to the use of these components. In this respect, an experimental study was carried out using sewage concrete pipes in full scale as specimens. The diameter of the specimens was 600 mm, and they had a length of 2500 mm. The pipes were reinforced with traditional bars and different contents of steel fibers in order to compare their performance through the crushing test. Two test procedures were used in that sense. In the 1st Series, the diameter displacement was monitored by the use of two LVDTs positioned at both extremities of the pipes. In the 2nd Series, just one LVDT is positioned at the spigot. The results shown a more rigidity response of the pipe during tests when the displacements were measured at the enlarged section of the socket. The fiber reinforcement was very effective, especially when low level of displacement was imposed to the FRCP. At this condition, the steel fibers showed an equivalent performance to superior class pipes made with traditional reinforced. The fiber content of 40 kg/m3 provided a hardening behavior for the FRCP, and could be considered as equivalent to the critical volume in this condition.
Citationde Figueiredo, A.D. [et al.]. Steel fiber reinforced concrete pipes. Part 1: technological analysis of the mechanical behavior. "IBRACON structures and materials journal", Gener 2012, vol. 5, núm. 1, p. 1-11.
URIhttp://hdl.handle.net/2117/15810
ISSN1983-4195
Publisher versionhttp://www.revistas.ibracon.org.br/index.php/riem/article/view/245/255
Collections
Share: