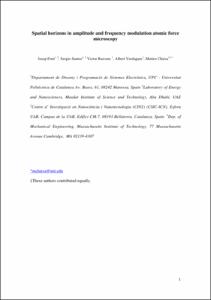 Thomson, Neil H.
Verdaguer, Albert
Chiesa, Matteo
Document typeArticle
Rights accessOpen Access
Abstract
In dynamic atomic force microscopy (AFM) the cantilever is vibrated and its dynamics are monitored to probe the sample with nanoscale and atomic resolution. Amplitude and frequency modulation (AM and FM) atomic force microscopy have established themselves as the most powerful, robust and reliable techniques in the field. Nevertheless, it is still debatable whether one or the other technique is preferred in a given medium or experiment. Here, we quantitatively establish the limitations in resolution of one and the other technique by introducing the concept of space horizon SH and quantifying it. The SH is the limiting space boundary beyond which collective atomic interactions do not affect the detection parameters of a given feedback system. We show that while an FM feedback can resolve an atom where an AM feedback might fail, relative contrast is in fact equivalent for both feedback systems. That is, if the AM feedback could detect sufficiently small amplitude shifts and there was no noise, single atom imaging would be equivalent in AM and FM.
CitationFont, J. [et al.]. Spatial horizons in amplitude and frequency modulation atomic force microscopy. "Nanoscale", 26 Gener 2012, vol. 7, núm. 4, p. 2463-2469.
URIhttp://hdl.handle.net/2117/15767
DOI10.1039/c2nr12012g
ISSN2040-3364
Collections
Share: