Emergence of glassy-like dynamics in an orientationally ordered phase 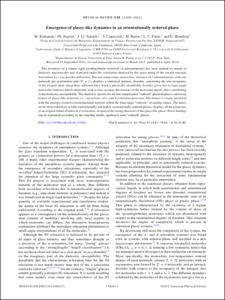 Mondieig, Denise
Document typeArticle
Rights accessOpen Access
Abstract
The dynamics of a simple rigid pseudoglobular molecule (2-adamantanone) has been studied by means of dielectric spectroscopy and examined under the constraints imposed by the space group of the crystal structure determined by x-ray powder diffraction. The low-temperature monoclinic structure of 2-adamantanone, with one molecule per asymmetric unit (Z'= 1), displays a statistical intrinsic disorder, concerning the site occupancy of the oxygen atom along three different sites. Such a physically identifiable disorder gives rise to large-angle molecular rotations which inherently lead to time-average fluctuations of the molecular dipole, thus contributing to the dielectric susceptibility. The dielectric spectra for the low-temperature “ordered” phase displays a universal feature of glassy-like materials, i.e., coexistence of α- and β-relaxation processes. The former is clearly identified with the strongly restricted reorientational motions within the long-range “ordered” crystalline lattice. The latter, never observed before in fully translationally and highly orientationally ordered phases, displays all the properties of an original Johari-Goldstein β-relaxation, in spite of the strong character of this glass-like phase. These findings can be explained according to the coupling model, applied to such “ordered” phases.
CitationRomanini, M. [et al.]. Emergence of glassy-like dynamics in an orientationally ordered phase. "Physical review B: condensed matter and materials physics", 04 Abril 2012, vol. 85, núm. 13, p. 134201-1-134201-7.
URIhttp://hdl.handle.net/2117/15765
DOI10.1103/PhysRevB.85.134201
ISSN1098-0121
Publisher versionhttp://link.aps.org/doi/10.1103/PhysRevB.85.134201
Collections
Share: