Spell-checking in Spanish: the case of diacritic accents 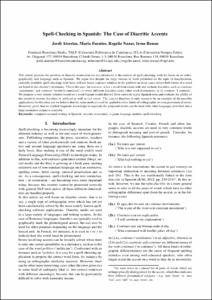 Show full item record
Atserias Batalla, Jordi
Fuentes Fort, Maria
Nazar, Rogelio
Renau, Irene
Document typeConference lecture
Rights accessOpen Access
Abstract
This article presents the problem of diacritic restoration (or diacritization) in the context of spell-checking, with the focus on an orthographically rich language such as Spanish. We argue that despite the large volume of work published on the topic of diacritization, currently available spell-checking tools have still not found a proper solution to the problem in those cases where both forms of a word are listed in the checker’s dictionary. This is the case, for instance, when a word form exists with and without diacritics, such as continuo ‘continuous’ and continuó ‘he/she/it continued’, or when different diacritics make other word distinctions, as in continúo ‘I continue’. We propose a very simple solution based on a word bigram model derived from correctly typed Spanish texts and evaluate the ability of this model to restore diacritics in artificial as well as real errors. The case of diacritics is only meant to be an example of the possible applications for this idea, yet we believe that the same method could be applied to other kinds of orthographic or even grammatical errors. Moreover, given that no explicit linguistic knowledge is required, the proposed model can be used with other languages provided that a large normative corpus is available.
CitationAtserias, J. [et al.]. Spell-checking in Spanish: the case of diacritic accents. A: International Conference on Language Resources and Evaluation. "2012 International Conference on Language Resources and Evaluation : proceedings". Istanbul: 2012, p. 1-6.
URIhttp://hdl.handle.net/2117/15661
Collections
Share: