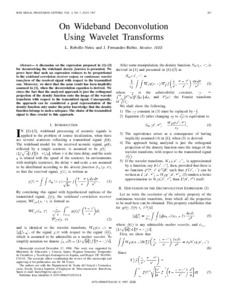 Document typeArticle
PublisherIEEE-INST ELECTRICAL ELECTRONICS ENGINEERS INC
Rights accessOpen Access
All rights reserved. This work is protected by the corresponding intellectual and industrial property rights. Without prejudice to any existing legal exemptions, reproduction, distribution, public communication or transformation of this work are prohibited without permission of the copyright holder
Abstract
A discussion on the expression proposed in [1]–[3] for deconvolving the wideband density function is presented. We prove here that such an expression reduces to be proportional to the wideband correlation receiver output, or continuous wavelet transform of the received signal with respect to the transmitted one. Moreover, we show that the same result has been implicitly assumed in [1], when the deconvolution equation is derived. We stress the fact that the analyzed approach is just the orthogonal projection of the density function onto the image of the wavelet transform with respect to the transmitted signal. Consequently, the approach can be considered a good representation of the density function only under the prior knowledge that the density function belongs to such a subspace. The choice of the transmitted signal is thus crucial to this approach.
CitationRebollo Neira, L.; Fernández Rubio, J. A. On wideband deconvolution using wavelet transform. IEEE Signal Processing Letters, 1997, vol. 4, núm. 7, p. 207-209.
URIhttp://hdl.handle.net/2117/1565
ISSN1070-9908
Collections
Share: