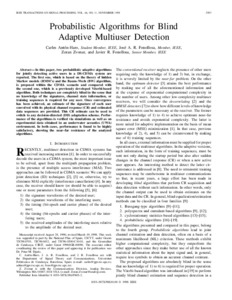 Document typeArticle
PublisherIEEE-INST ELECTRICAL ELECTRONICS ENGINEERS INC
Rights accessOpen Access
Abstract
In this paper, two probabilistic adaptive algorithms for jointly detecting active users in a DS-CDMA system are reported. The first one, which is based on the theory of hidden Markov models (HMM’s) and the Baum–Wech (BW) algorithm, is proposed within the CDMA scenario and compared with the second one, which is a previously developed Viterbi-based algorithm. Both techniques are completely blind in the sense that no knowledge of the signatures, channel state information, or training sequences is required for any user. Once convergence has been achieved, an estimate of the signature of each user convolved with its physical channel response (CR) and estimated data sequences are provided. This CR estimate can be used to switch to any decision-directed (DD) adaptation scheme. Performance of the algorithms is verified via simulations as well as on experimental data obtained in an underwater acoustics (UWA) environment. In both cases, performance is found to be highly satisfactory, showing the near–far resistance of the analyzed algorithms.
CitationAntón Haro, C.; Rodríguez Fonollosa, J. A.; Zvonar, Z.; Rodríguez Fonollosa, J. Probabilistic algorithms for blind adaptive multiuser detection. IEEE Transactions on Signal Processing, 1998, vol. 46, núm. 11, p. 2953-2966.
URIhttp://hdl.handle.net/2117/1564
ISSN1053-587X
Collections
Share: