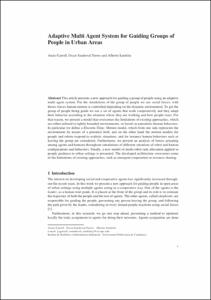 Document typeConference report
PublisherSpringer
Rights accessOpen Access
Abstract
This article presents a new approach for guiding a group of people using an adaptive multi agent system. For the simulations of the group of people we use social forces, with theses forces human motion is controlled depending on the dynamic environment. To get the group of people being guide we use a set of agents that work cooperatively and they adapt their behavior according to the situation where they are working and how people react. For that reason, we present a model that overcomes the limitations of existing approaches, which are either tailored to tightly bounded environments, or based on unrealistic human behaviors. In particular we define a Discrete-Time- Motion model, which from one side represents the environment by means of a potential field, and on the other hand the motion models for people and robots respond to realistic situations, and for instance human behaviors such as leaving the group are considered. Furthermore, we present an analysis of forces actuating among agents and humans throughout simulations of different situations of robot and human configurations and behaviors. Finally, a new model of multi-robot task allocation applied to people guidance in urban settings is presented. The developed architecture overcomes some of the limitations of existing approaches, such as emergent cooperation or resource sharing.
CitationGarrell, A.; Sandoval, O.; Sanfeliu, A. Adaptive multi agent system for guiding groups of people in urban areas. A: International Conference on Practical Applications of Agents and Multiagent Systems. "Highlights in Practical Applications of Agents and Multiagent Systems, Vol 88 of Advances in Intelligent and Soft Computing". Salamanca: Springer, 2011, p. 175-184.
URIhttp://hdl.handle.net/2117/15548
DOI10.1007/978-3-642-19917-2_22
ISBN978-3-642-19874-8
Publisher versionhttp://dx.doi.org/10.1007/978-3-642-19917-2_22
Collections
Share: