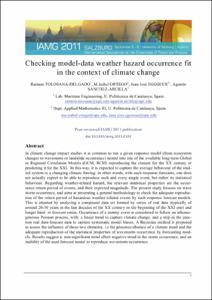 Document typeConference report
Rights accessOpen Access
Abstract
In climate change impact studies it is common to run a given response model (from ecosystem changes to wavestorm or landslide occurrence) nested into one of the available long-term Global or Regional Circulation Models (GCM, RCM) reproducing the climate for the XX century or predicting it for the XXI. In this way, it is expected to capture the average behaviour of the studied system to a changing climate forcing: in other words, with such response forecasts, one does not actually expect to be able to reproduce each and every single event, but rather its statistical behaviour. Regarding weather-related hazard, the relevant statistical properties are the occurrence return period of events, and their expected magnitude. The present study focuses on wave storm occurrence, and aims at presenting a general methodology to check the adequate reproduction of the return period of hazardous weather-related events by such response forecast models. This is attained by analysing a compound data set formed by series of real data (typically of around 20-30 years in the last decades of the XX century or the beginning of the XXI one) and longer hind- or forecast series. Occurrence of a stormy event is considered to follow an inhomogeneous Poisson process, with: a linear trend to capture climate change, and a step in the junction real data-forecast data to capture systematic model biases. A Bayesian method is proposed to assess the influence of these two elements, i.e the presence/absence of a climate trend and the adequate reproduction of the statistical properties of wavestorm occurrence by forecasting models. Results suggest a non-significant trend albeit negative trend in the storm occurrence, and an inability of the used forecast model to reproduce wavestorm occurrence.
CitationTolosana-Delgado, R. [et al.]. Checking model-data weather hazard occurrence fit in the context of climate change. A: Annual Conference of the International Association for Mathematical Geosciences. "Proceedings of the 2011 Annual Conference of the International Association for Mathematical Geosciences". Salzburg: 2011, p. 870-877.
URIhttp://hdl.handle.net/2117/15527
DOI10.5242/iamg.2011.0101
Publisher versionhttp://www.cogeo.at/publications/iamg2011/IAMG2011_proceedings/mobile/index.html
Collections
Share: