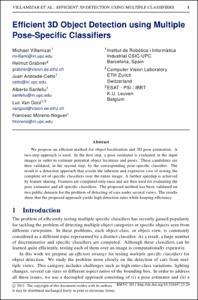 Document typeConference report
Rights accessOpen Access
European Commission's projectCEEDS - The Collective Experience of Empathic Data Systems (EC-FP7-258749)
Abstract
We propose an efficient method for object localization and 3D pose estimation. A two-step approach is used. In the first step, a pose estimator is evaluated in the input images in order to estimate potential object locations and poses. These candidates are then validated, in the second step, by the corresponding pose-specific classifier. The result is a detection approach that avoids the inherent and expensive cost of testing the complete set of specific classifiers over the entire image. A further speedup is achieved by feature sharing. Features are computed only once and are then used for evaluating the pose estimator and all specific classifiers. The proposed method has been validated on two public datasets for the problem of detecting of cars under several views. The results show that the proposed approach yields high detection rates while keeping efficiency.
CitationVillamizar, M.A. [et al.]. Efficient 3D object detection using multiple pose-specific classifiers. A: British Machine Vision Conference. "Proceedings of the 22nd British Machine Vision Conference". Dundee: 2011, p. 20.1-20.10.
URIhttp://hdl.handle.net/2117/15428
DOI10.5244/C.25.20
Publisher versionhttp://dx.doi.org/10.5244/C.25.20
Collections
Share: