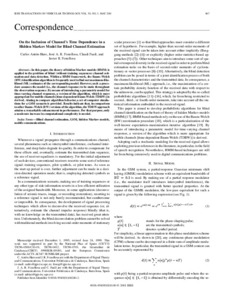 Document typeArticle
PublisherIEEE-INST ELECTRICAL ELECTRONICS ENGINEERS INC
Rights accessOpen Access
Abstract
In this paper, the theory of hidden Markov models (HMM) is applied to the problem of blind (without training sequences) channel estimation and data detection. Within a HMM framework, the Baum–Welch(BW) identification algorithm is frequently used to find out maximum-likelihood (ML) estimates of the corresponding model. However, such a procedure assumes the model (i.e., the channel response) to be static throughout the observation sequence. By means of introducing a parametric model for time-varying channel responses, a version of the algorithm, which is more appropriate for mobile channels [time-dependent Baum-Welch (TDBW)] is derived. Aiming to compare algorithm behavior, a set of computer simulations for a GSM scenario is provided. Results indicate that, in comparison to other Baum–Welch (BW) versions of the algorithm, the TDBW approach attains a remarkable enhancement in performance. For that purpose, only a moderate increase in computational complexity is needed.
CitationAntón Haro, C.; Rodríguez Fonollosa, J. A.; Fauli, C.; Rodríguez Fonollosa, J. On the inclusion of channel's time dependence in a hidden Markov model for blind channel estimation. IEEE Transactions on Vehicular Technology, 2001, vol. 50, núm. 3, p. 867-873.
URIhttp://hdl.handle.net/2117/1542
ISSN0018-9545
Collections
Share: