ROFI structure in the gulf of Lions and the NW Mediterranean Sea: field and remote sensing observations of surface coherent structures 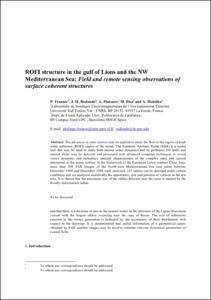 Show full item record
Fraunie, Philippe
Redondo Apraiz, José Manuel
Platónov, Alexéi Konstantínovich
Díez Rilova, Margarita
Matulka, Anna Magdalena
Document typeConference lecture
PublisherUniversidad Complutense de Madrid (UCM)
Rights accessOpen Access
Abstract
The advances in radar sensors may be applied to study the flow in the region of fresh water influence (ROFI) region of the ocean. The Synthetic Aperture Radar (SAR) is a useful tool that may be used to study both marine water dynamics and its pollution. Oil spills and natural slicks may be detected and processed with advanced computer techniques to reveal vortex dynamics and turbulence spectral characteristics of the complex eddy and current interaction in the ocean surface. In the framework of the European Union contract Clean Seas, more than 300 SAR images of the North-west Mediterranean Sea area taken between December 1996 and December 1998 were analyzed. 255 eddies can be detected under certain conditions and we analyzed statistically the appearance, size and position of vortices in the test area. It is shown that the maximum size of the eddies detected near the coast is limited by the Rossby deformation radius To be discussed and that there is a decrease in size in the coastal waters in the direction of the Liguro-Provenzal current with the largest eddies occurring near the cape of Rosas. The role of submarine canyons in the vortex generation is indicated by the asymmetry of their distribution with respect to the thalwegs. It is demonstrated that useful information of a geometrical nature obtained by SAR satellite images may be used to estimate relevant dynamical parameters of coastal flows
CitationFraunie, P. [et al.]. ROFI structure in the gulf of Lions and the NW Mediterranean Sea: field and remote sensing observations of surface coherent structures. A: Summer School and Workshop on Environmental Turbulence. "SSWET". Madrid: Universidad Complutense de Madrid (UCM), 2010, p. 1-18.
URIhttp://hdl.handle.net/2117/15346
Publisher versionhttp://www.ucm.es/info/fluidos/MADRID/FRAUNIE_REDONDO_PLATONOV_MATULKA.pdf
Collections
Share: