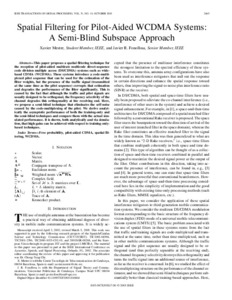 Document typeArticle
PublisherIEEE-INST ELECTRICAL ELECTRONICS ENGINEERS INC
Rights accessOpen Access
All rights reserved. This work is protected by the corresponding intellectual and industrial property rights. Without prejudice to any existing legal exemptions, reproduction, distribution, public communication or transformation of this work are prohibited without permission of the copyright holder
Abstract
This paper proposes a spatial filtering technique for the reception of pilot-aided multirate multicode direct-sequence code division multiple access (DS/CDMA) systems such as wideband CDMA (WCDMA). These systems introduce a code-multiplexed pilot sequence that can be used for the estimation of the filter weights, but the presence of the traffic signal (transmitted at the same time as the pilot sequence) corrupts that estimation and degrades the performance of the filter significantly. This is caused by the fact that although the traffic and pilot signals are usually designed to be orthogonal, the frequency selectivity of the channel degrades this orthogonality at hte receiving end. Here, we propose a semi-blind technique that eliminates the self-noise caused by the code-multiplexing of the pilot. We derive analytically the asymptotic performance of both the training-only and the semi-blind techniques and compare them with the actual simulated performance. It is shown, both analytically and via simulation, that high gains can be achieved with respect to training-onlybased techniques.
CitationMestre Pons, X.; Rodríguez Fonollosa, J. Spatial filtering for pilot-aided WCDMA systems: a semi-blind subspace approach. IEEE Transactions on signal Processing, 2003, vol. 51, núm.10, p. 2665-2678.
URIhttp://hdl.handle.net/2117/1530
ISSN1053-587X
Collections
Share: