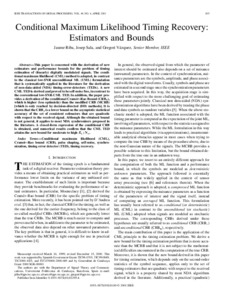 Document typeArticle
PublisherIEEE-INST ELECTRICAL ELECTRONICS ENGINEERS INC
Rights accessOpen Access
Abstract
This paper is concerned with the derivation of new estimators and performance bounds for the problem of timing estimation of (linearly) digitally modulated signals. The conditional maximum likelihood (CML) method is adopted, in contrast to the classical low-SNR unconditional ML (UML) formulation that is systematically applied in the literature for the derivation of non-data-aided (NDA) timing-error-detectors (TEDs). A new CML TED is derived and proved to be self-noise free, in contrast to the conventional low-SNR-UML TED. In addition, the paper provides a derivation of the conditional Cramér–Rao Bound (CRB ), which is higher (less optimistic) than the modified CRB (MCRB) [which is only reached by decision-directed (DD) methods]. It is shown that the CRB is a lower bound on the asymptotic statistical accuracy of the set of consistent estimators that are quadratic with respect to the received signal. Although the obtained bound is not general, it applies to most NDA synchronizers proposed in the literature. A closed-form expression of the conditional CRB is obtained, and numerical results confirm that the CML TED attains the new bound for moderate to high Eg/No.
CitationRiba Sagarra, J.; Sala Alvarez, J.; Vazquez Grau, G. Conditional maximum likelihood timing recovery: estimators and bounds. IEEE Transactions on Signal Processing. 2001, vol. 49, núm. 4 p. 835-850.
URIhttp://hdl.handle.net/2117/1522
ISSN1053-587X
Collections
Share: