Execution of a dual-object (pushing) action with semantic event chains 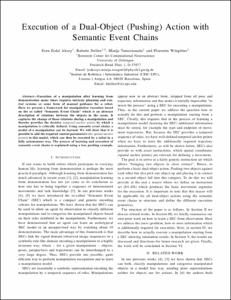 Show full item record
Aksoy, Eren Erdal
Dellen, Babette
Tamosiunaite, Minija
Wörgötter, Florentin
Document typeConference report
PublisherIEEE Press. Institute of Electrical and Electronics Engineers
Rights accessOpen Access
European Commission's projectINTELLACT - Intelligent observation and execution of Actions and manipulations (EC-FP7-269959)
XPERIENCE - Robots Bootstrapped through Learning from Experience (EC-FP7-270273)
Abstract
Execution of a manipulation after learning from demonstration many times requires intricate planning and control systems or some form of manual guidance for a robot. Here we present a framework for manipulation execution based on the so called “Semantic Event Chain” which is an abstract description of relations between the objects in the scene. It captures the change of those relations during a manipulation and thereby provides the decisive temporal anchor points by which a manipulation is critically defined. Using semantic event chains a model of a manipulation can be learned. We will show that it is possible to add the required control parameters (the spatial anchor points) to this model, which can then be executed by a robot in a fully autonomous way. The process of learning and execution of semantic event chains is explained using a box pushing example.
CitationAksoy , E. [et al.]. Execution of a dual-object (pushing) action with semantic event chains. A: IEEE-RAS International Conference on Humanoid Robots. "Proceedings of 11th IEEE-RAS International Conference on Humanoid Robots". Bled: IEEE Press. Institute of Electrical and Electronics Engineers, 2011, p. 576-583.
URIhttp://hdl.handle.net/2117/15177
DOI10.1109/Humanoids.2011.6100833
Publisher versionhttp://dx.doi.org/10.1109/Humanoids.2011.6100833
Collections
Share: