Anodic oxidation of titanium for implants and prothesis: processing characterization and potential improvement of osteointegration 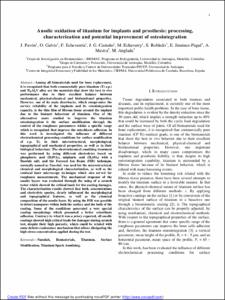 Except where otherwise noted, content on this work is licensed under a Creative Commons license : Attribution-NonCommercial-NoDerivs 3.0 Spain
Abstract
Among all biomaterials used for bone replacement, it is recognized that both commercially pure titanium (Ti c.p.) and Ti6Al4V alloy are the materials that show the best in vivo performance due to their excellent balance between mechanical, physical-chemical and biofunctional properties. However, one of its main drawbacks, which compromise the service reliability of the implants and its osteointegration capacity, is the thin film of fibrous tissue around the implant due to the bioinert behaviour of titanium. One of the alternatives more studied to improve the titanium osteointegration is the surface modification through the control of the roughness parameters within a specific range which is recognized that improve the osteoblasts adhesion. In this work is investigated the influence of different electrochemical processing conditions for surface modification of c.p. Ti, in their microstructural, morphological, topographical and mechanical properties, as well as in their biological behaviour. The electrochemical anodizing treatment was performed by using different electrolytes based on phosphoric acid (H3PO4), sulphuric acid (H2SO4) with a fluoride salt; and the Focused Ion Beam (FIB) technique, normally named as Nanolab, was used for the microstructural, chemical and morphological characterization, as well as the confocal laser microscopy technique which also served for roughness measurements. The mechanical response of the anodic layers was evaluated through the using of a scratch tester which showed the critical loads for the coating damages. The characterization results showed that both, concentrations and electrolyte species, clearly influenced the morphological and topographical features, as well as the chemical composition of the anodic layer. By using the FIB was possible to detect nanopores within both the surface and the bulk of the coating. Some of the conditions generated a very special coating morphology which promoted a better osteoblasts adhesion. Contrary to what it was a priory expected, all anodic coatings showed high critical loads for damages during scratch test, despite their high porosity, which could be related with some defects coalescence mechanism that allows dissipating the high stress concentration applied during the test.
CitationPavon, J. [et al.]. Anodic oxidation of titanium for implants and prothesis: processing characterization and potential improvement of osteointegration. A: Congreso Latinoamericano de Ingeniería Biomédica. "Actas CLAIB 2011". La Habana: 2011, p. 1-4.
URIhttp://hdl.handle.net/2117/14906
Collections
Share: