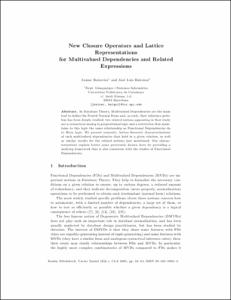 Document typeConference report
Rights accessOpen Access
Abstract
In Database Theory, Multivalued Dependencies are the main tool to define the Fourth Normal Form and, as such, their inference problem has been deeply studied; two related notions appearing in that study are a syntactical analog in propositional logic and a restriction that maintains to this logic the same relationship as Functional Dependencies do to Horn logic. We present semantic, lattice-theoretic characterizations of such multivalued dependencies that hold in a given relation, as well as similar results for the related notions just mentioned. Our characterizations explain better some previously known facts by providing a unifying framework that is also consistent with the studies of Functional Dependencies.
CitationBaixeries, J.; Balcazar, J. New Closure Operators and Lattice Representations for Multivalued Dependencies and Related Expressions. A: Concept Lattices and Their Applications. "CLA 2005 : proceedings of 3rd International Conference on Concept Lattices and Their Applications". Olomouc: 2005, p. 22-33.
URIhttp://hdl.handle.net/2117/14870
ISBN8024808633
Collections
Share: