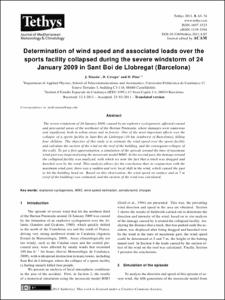 Document typeArticle
PublisherACAM
Rights accessOpen Access
Abstract
The severe windstorm of 24 January 2009, caused by an explosive cyclogenesis, affected coastal and precoastal areas of the northeast of the Iberian Peninsula, where damages were numerous and significant, both in urban areas and in forests. One of the most important effects was the collapse of a sports facility in Sant Boi de Llobregat (10 km southwest of Barcelona), killing four children. The objective of this study is to estimate the wind speed over the sports facility and calculate the suction of the wind on the roof of the building, and the consequent collapse of the walls. To get a first approximation, a simulation of the episode around the time of maximum wind gust was inspected using the mesoscale model MM5. In the second part, the damage around the collapsed facility was analyzed, with which we note the fact that a truck was dragged and knocked over by the wind. This analysis allows for the conclusion that, in conjunction with the maximum wind gust, there was a sudden and very local shift in the wind, which caused the gust to hit the building head on. Based on this observation, the wind speed on surface and at 7 m (roof of the building) was estimated, and the suction of the wind was calculated
CitationMazon, J.; Crespo, D.; Pino, D. Determination of wind speed and associated loads over the sports facility collapsed during the severe windstorm of 24 January 2009 in Sant Boi de Llobregat (Barcelona). "Tethys: Journal of Mediterranean Meteorology and Climatology", 23 Juny 2011.
URIhttp://hdl.handle.net/2117/14858
DOI10.3369/tethys.2011.8.07
ISSN1697-1523
Collections
Share: