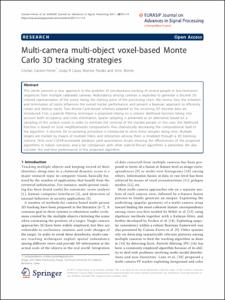 Document typeArticle
PublisherHINDAWI
Rights accessOpen Access
Abstract
This article presents a new approach to the problem of simultaneous tracking of several people in low-resolution sequences from multiple calibrated cameras. Redundancy among cameras is exploited to generate a discrete 3D colored representation of the scene, being the starting point of the processing chain. We review how the initiation and termination of tracks influences the overall tracker performance, and present a Bayesian approach to efficiently create and destroy tracks. Two Monte Carlo-based schemes adapted to the incoming 3D discrete data are introduced. First, a particle filtering technique is proposed relying on a volume likelihood function taking into account both occupancy and color information. Sparse sampling is presented as an alternative based on a sampling of the surface voxels in order to estimate the centroid of the tracked people. In this case, the likelihood function is based on local neighborhoods computations thus dramatically decreasing the computational load of the algorithm. A discrete 3D re-sampling procedure is introduced to drive these samples along time. Multiple targets are tracked by means of multiple filters, and interaction among them is modeled through a 3D blocking scheme. Tests over CLEAR-annotated database yield quantitative results showing the effectiveness of the proposed algorithms in indoor scenarios, and a fair comparison with other state-of-the-art algorithms is presented. We also consider the real-time performance of the proposed algorithm.
CitationCanton-Ferrer, C. [et al.]. Multi-camera multi-object voxel-based Monte Carlo 3D tracking strategies. "Eurasip journal on advances in signal processing", 23 Novembre 2011, vol. 2011, núm. 114, p. 1-15.
URIhttp://hdl.handle.net/2117/14844
DOI10.1186/1687-6180-2011-114
ISSN1687-6172
Publisher versionhttp://asp.eurasipjournals.com/content/2011/1/114
Collections
Share: