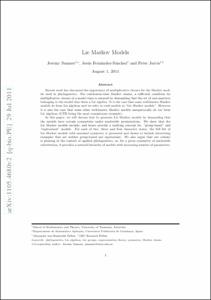 Jarvis, Peter
Document typeArticle
Rights accessOpen Access
Abstract
Recent work has discussed the importance of multiplicative closure for the Markov mod- els used in phylogenetics. For continuous-time Markov chains, a sufficient condition for multiplicative closure of a model class is ensured by demanding that the set of rate-matrices belonging to the model class form a Lie algebra. It is the case that some well-known Markov models do form Lie algebras and we refer to such models as “Lie Markov models”. However it is also the case that some other well-known Markov models unequivocally do not form Lie algebras (GTR being the most conspicuous example). In this paper, we will discuss how to generate Lie Markov models by demanding that the models have certain symmetries under nucleotide permutations. We show that the Lie Markov models include, and hence provide a unifying concept for, “group-based” and “equivariant” models. For each of two, three and four character states, the full list of Lie Markov models with maximal symmetry is presented and shown to include interesting examples that are neither group-based nor equivariant. We also argue that our scheme is pleasing in the context of applied phylogenetics, as, for a given symmetry of nucleotide substitution, it provides a natural hierarchy of models with increasing number of parameters.
CitationSumner, J.; Fernández, J.; Jarvis, P. Lie Markov model. "Journal of theoretical biology", 2012, vol. 298, p. 16-31.
URIhttp://hdl.handle.net/2117/14761
ISSN0022-5193
Collections
Share: