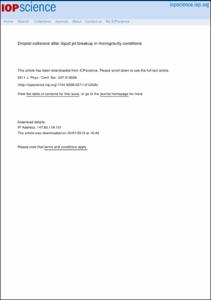 Except where otherwise noted, content on this work is licensed under a Creative Commons license : Attribution-NonCommercial-NoDerivs 3.0 Spain
Abstract
The droplet dynamics and collisions after a liquid jet breakup have been experimentally studied in low gravity conditions. An experimental setup was designed in order to be used at the I.N.T.A. Drop Tower, which allows for 2.1 seconds of microgravity. The dynamics of distilled water jets injected into a rectangular tank was recorded by means of a high-speed video camera. Observations of the droplet trajectories showed a conical shape of the liquid jet caused by droplet collisions just after detachment from the liquid jet. The detached droplets initially follow straight paths at constant velocity in the direction of injection. Deviation of these trajectories is a consequence of the collision between two droplets with an impact parameter slightly different from zero. The collision between two droplets can give rise to coalescence or bouncing between droplets depending on the droplet velocity difference and impact parameter. At low values of the relative velocity, the collision leads to coalescence between droplets, while at higher values the collision results in bouncing between droplets.
CitationSuñol, F.; González, R. Droplet collisions after liquid jet breakup in microgravity conditions. "Journal of Physics: Conference Series", 2011, vol. 327, núm. 012026.
URIhttp://hdl.handle.net/2117/14719
DOI10.1088/1742-6596/327/1/012026
ISSN1742-6588
Publisher versionhttp://iopscience.iop.org/1742-6596/327/1/012026
Collections
Share: