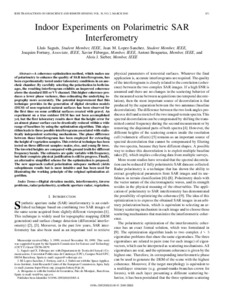 A coherence optimization method, which makes use of polarimetry to enhance the quality of SAR interferograms, has been experimentally tested under laboratory conditions in an anechoic chamber. By carefully selecting the polarization in both images, the resulting interferogram exhibits an improved coherence above the standard HH or VV channel. This higher coherence produces a lower phase variance, thus estimating the underlying topography more accurately. The potential improvement that this technique provides in the generation of digital elevation models (DEM) of non-vegetated natural surfaces has been observed for the first time on some artificial surfaces created with gravel. An experiment on a true outdoor DEM has not been accomplished yet, but the first laboratory results show that the height error for an almost planar surface can be drastically reduced within a wide range of baselines by using the optimization algorithm. This algorithm leads to three possible interferograms associated with statistically independent scattering mechanisms. The phase difference between those interferograms has been employed for extracting the height of vegetation samples. This retrieval technique has been tested on three different samples: maize, rice, and young fir trees. The inverted heights are compared with ground truth for different frequency bands. The estimates are quite variable with frequency, but their complete physical justification is still in progress. Finally, an alternative simplified scheme for the optimization is proposed. The new approach (called polarization subspace method) yields suboptimum results but is more intuitive and has been used for illustrating the working principle of the original optimization algorithm.
CitationSagués, Ll.; López-Sánchez, J. M.; Fortuny, J.; Fàbregas, X.; Broquetas, A.; Sieber, A. J. Indoor experiments on polarimetric SAR interferometry. IEEE Transactions on geoscience and remote sensing, 2000, vol. 38, núm. 2, p. 671-684.
URIhttp://hdl.handle.net/2117/1464
ISSN0196-2892