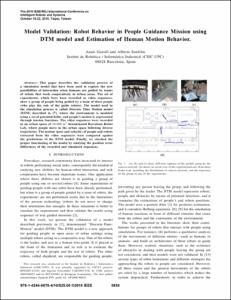 Document typeConference report
Rights accessOpen Access
Abstract
This paper describes the validation process of a simulation model that have been used to explore the new possibilities of interaction when humans are guided by teams of robots that work cooperatively in urban areas. The set of experiments, which have been recorded as video sequences, show a group of people being guided by a team of three people (who play the role of the guide robots). The model used in the simulation process is called Discrete Time Motion model (DTM) described in [7], where the environment is modeled using a set of potential fields, and people’s motion is represented through tension functions. The video sequences were recorded in an urban space of 10:000 m2 denominated Barcelona Robot Lab, where people move in the urban space following diverse trajectories. The motion (pose and velocity) of people and robots extracted from the video sequences were compared against the predictions of the DTM model. Finally, we checked the proper functioning of the model by studying the position error differences of the recorded and simulated sequences.
CitationGarrell, A.; Sanfeliu, A. Model validation: robot behavior in people guidance mission using DTM model and estimation of human motion behavior. A: IEEE/RSJ International Conference on Intelligent Robots and Systems. "IROS 2010 : the IEEE/RSJ 2010 International Conference on Intelligent Robots and Systems: proceedings : Taipei, Taiwan, Oct. 18-22, 2010". Taipei: 2010, p. 5836-5841.
URIhttp://hdl.handle.net/2117/14614
DOI10.1109/IROS.2010.5651685
Publisher versionhttp://dx.doi.org/10.1109/IROS.2010.5651685
Collections
Share: