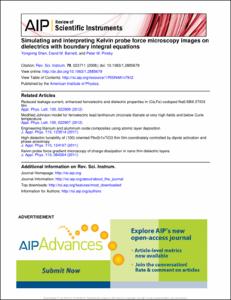 Barnett, David M.
Pinsky, Peter M.
Document typeArticle
Rights accessOpen Access
Abstract
Kelvin probe force microscopy KPFM is designed for measuring the tip-sample contact potential differences by probing the sample surface, measuring the electrostatic interaction, and adjusting a feedback circuit. However, for the case of a dielectric insulating sample, the contact potential difference may be ill defined, and the KPFM probe may be sensing electrostatic interactions with a certain distribution of sample trapped charges or dipoles, leading to difficulty in interpreting the images.We have proposed a general framework based on boundary integral equations for simulating the KPFM image based on the knowledge about the sample charge distributions forward problem and a deconvolution algorithm solving for the trapped charges on the surface from an image inverse problem . The forward problem is a classical potential problem, which can be efficiently solved using the boundary element method. Nevertheless, the inverse problem is ill posed due to data incompleteness. For some special cases, we have developed deconvolution algorithms based on the forward problem solution. As an example, this algorithm is applied to process the KPFM image of a gadolinia-doped ceria thin film to solve for its surface charge density, which is a more relevant quantity for samples of this kind than the contact potential difference normally only defined for conductive samples values contained in the raw image.
CitationShen, Y.; Barnett, D.; Pinsky, P. M. Simulating and interpreting Kelvin probe force microscopy images on dielectrics with boundary integral equations. "Review of scientific instruments", 2008, vol. 79, núm. 2.
URIhttp://hdl.handle.net/2117/14591
DOI10.1063/1.2885679
ISSN0034-6748
Publisher versionhttp://cataleg.upc.edu/record=b1212861~S1*cat
Collections
Share: