The white dwarf cooling sequence of NGC 6791: an unique tool for stellar astrophysics 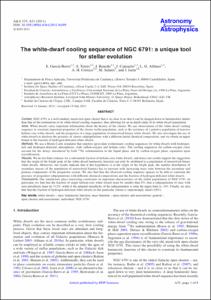 Althaus, Leandro Gabriel
Córsico, Alejandro Hugo
Salaris, Maurizio
Isern Vilaboy, Jordi
Document typeArticle
Rights accessOpen Access
Abstract
Context. NGC 6791 is a well-studied, metal-rich open cluster that is so close to us that it can be imaged down to luminosities fainter than that of the termination of its white-dwarf cooling sequence, thus allowing for an in-depth study of its white dwarf population. Aims. White dwarfs carry important information about the history of the cluster. We use observations of the white-dwarf cooling sequence to constrain important properties of the cluster stellar population, such as the existence of a putative population of massive helium-core white dwarfs, and the properties of a large population of unresolved binary white dwarfs. We also investigate the use of white dwarfs to disclose the presence of cluster subpopulations with a different initial chemical composition, and we obtain an upper bound to the fraction of hydrogen-deficient white dwarfs. Methods. We use a Monte Carlo simulator that employs up-to-date evolutionary cooling sequences for white dwarfs with hydrogenrich and hydrogen-deficient atmospheres, with carbon-oxygen and helium cores. The cooling sequences for carbon-oxygen cores account for the delays introduced by both 22Ne sedimentation in the liquid phase and by carbon-oxygen phase separation upon crystallization. Results. We do not find evidence for a substantial fraction of helium-core white dwarfs, and hence our results support the suggestion that the origin of the bright peak of the white-dwarf luminosity function can only be attributed to a population of unresolved binary white dwarfs. Moreover, our results indicate that if this hypothesis is at the origin of the bright peak, the number distribution of secondary masses of the population of unresolved binaries has to increase with increasing mass ratio between the secondary and primary components of the progenitor system. We also find that the observed cooling sequence appears to be able to constrain the presence of progenitor subpopulations with different chemical compositions and the fraction of hydrogen-deficient white dwarfs. Conclusions. Our simulations place interesting constraints on important characteristics of the stellar populations of NGC 6791. In particular, we find that the fraction of single helium-core white dwarfs must be smaller than 5%, that a subpopulation of stars with zero metallicity must be <∼12%, while if the adopted metallicity of the subpopulation is solar the upper limit is ∼8%. Finally, we also find that the fraction of hydrogen-deficient white dwarfs in this particular cluster is surprinsingly small (<∼6%).
CitationGarcía-Berro, E. [et al.]. The white dwarf cooling sequence of NGC 6791: an unique tool for stellar astrophysics. "Astronomy and astrophysics", 2011.
URIhttp://hdl.handle.net/2117/14561
DOI10.1051/0004-6361/201116499
ISSN0004-6361
Publisher versionhttp://cds.aanda.org/articles/aa/pdf/2011/09/aa16499-11.pdf
Collections
Share: