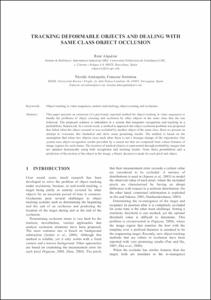 Document typePart of book or chapter of book
PublisherINSTICC Press. Institute for Systems and Technologies of Information, Control and Communication
Rights accessOpen Access
Abstract
This paper presents an extension of a previously reported method for object tracking in video sequences to handle the problems of object crossing and occlusion by other objects in the same class that the one followed. The proposed solution is embedded in a system that integrates recognition and tracking in a probabilistic framework. In a recent work, a method to approach the object occlusion problem was proposed that failed when the object crossed or was occluded by another object of the same class. Here we present an attempt to overcome this limitation and show some promising results. The method is based on the assumption that when two objects cross each other there is not a brusque change of the trajectories. Our system uses object recognition results provided by a neural net that are computed from colour features of image regions for each frame. The location of tracked objects is represented through probability images that are updated dynamically using both recognition and tracking results. From these probabilities and a prediction of the motion of the object in the image, a binary decision is made for each pixel and object.
CitationAlquezar, R.; Amézquita, N.; Serratosa, F. Tracking deformable objects and dealing with same class object occlusion. A: "International Conference on Computer Vision Theory and Applications". INSTICC Press. Institute for Systems and Technologies of Information, Control and Communication, 2009, p. 590-594.
URIhttp://hdl.handle.net/2117/14460
ISBN978-989-8111-692
Publisher versionhttp://visapp.visigrapp.org/VISAPP2009/cfp.asp
Collections
Share: