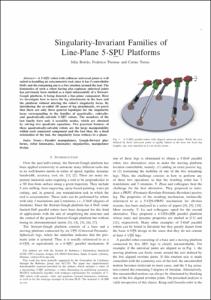 Document typeArticle
Rights accessOpen Access
Abstract
A 5-SPU robot with collinear universal joints is well suited to handling an axisymmetric tool, since it has 5 controllable DoFs and the remaining one is a free rotation around the tool. The kinematics of such a robot having also coplanar spherical joints has previously been studied as a rigid subassembly of a Stewart- Gough platform, it being denoted a line-plane component. Here we investigate how to move the leg attachments in the base and the platform without altering the robot’s singularity locus. By introducing the so-called 3D space of leg attachments, we prove that there are only three general topologies for the singularity locus corresponding to the families of quartically-, cubicallyand quadratically-solvable 5-SPU robots. The members of the last family have only 4 assembly modes, which are obtained by solving two quadratic equations. Two practical features of these quadratically-solvable robots are the large manipulability within each connected component and the fact that, for a fixed orientation of the tool, the singularity locus reduces to a plane.
CitationBorras, J.; Thomas, F.; Torras, Carme. Singularity-invariant families of line-plane 5-SPU platforms. "IEEE transactions on robotics", Octubre 2011, vol. 27, núm. 5, p. 837-848.
URIhttp://hdl.handle.net/2117/14455
DOI10.1109/TRO.2011.2158018
ISSN1552-3098
Collections
Share: